Here's a plug for my bass player, Vincent Ong's band, GruvAvenue, for their upcoming concert!

Go check it out..

CHANNELING THE GROOVE INTO YOUR SYSTEM

- GruvAvénue "The Awakening" Live Concert in The Actors Studio, Bangsar - 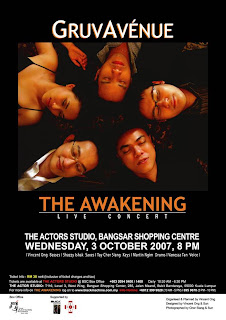 Kuala Lumpur , 1 Sept 2007 – Once in awhile in the musical incubator of the downtown club scene, a truly musically sophisticated work with broad appeal emerges as if from nowhere. The truth, of course, is that these gems are the results of years of hard work, artistic development and unique musical vision: all these crystallize the release of self-titled debut album " GruvAvénue" in 2005.

Looking forward, GruvAvénue is set to wow audience again with yet another feat – the first Malaysian Jazz group to record a live album. Scheduled for October 3, 2007, at The Actors Studio, the band will captivate audience with their full range of original compositions. The elements are delicate melodies, strong rhythmic sense, vibrant harmonic nuances and pulsating grooves!

GruvAvénue keeps a simple and yet organic instrumentation – bass, saxophone, drum, keys and vocals. As a collective, "GruvAvenue" artists come from a wide range of jazz backgrounds which sees as a binding force. These musicians embrace not only free improvisations but also appreciate tonal composition and extended musical forms and changes. Any brief moments of conventionality are trumped by eclecticism, an excellent composing transcends the established musical borders and stares down current definitions of what jazz should be. They have come together with a love for the new as well as the old…each bringing a universal quality that reaches out to varied audience.

Vincent Ong, bassist described as a friendly iconoclast, an artist who enthusiastically explores new concepts at the cutting edge of jazz. A stylistic chameleon that uses different textures and colors to create tension and augment a song's complexity.

Tay Cher Siang , pianist with flawless embrace for the keys presents the 'sweet' touch. Somewhat authoritative yet moving, he hovers somewhere between homage and prayer while slowly building and then writhing the mood.

Shazee Ishak, saxophonist and rapper brings forth sensual harmonic nuances on his wind instrument and expands the group's spectrum of sound with intoxicating loops through modern technology.

Vanessa Tan, a gift to jazz buffs. Not just for her exuberance but her ability to articulate without resorting to imitation, synthesizes with her own estimable talent and results is eye-opening and entertaining. She can shift from one color and feel to the next deftly, moving from throaty version to swinging up-tempo.

Posted by Julian at 8:08 PM No comments:

Just taking a little break from work in KL, and just wanted to get out of town. Feeling quite stressed with work and all, so it's always nice just to get out, even if it's to another city.

Singapore is usually my multiple-trip holiday place, especially if I want to be out of KL for a couple of days. So, I come here a few times a year. For me, it's a great place to hang out, with a slightly different music scene, and usually quite a welcoming one, too. It's always refreshing to see a different group of musicians playing, and for most part, the level of musicianship is generally much higher here, so it's always a challenge to play with some of these guys.

Oh yeah, Singapore's a real nice place to shop, too... I've already got some nice stuff here, which you would usually get at a premium in KL...just got a nice pair of Croc slippers for about S$54... a nice pair of AKG mini headphones... The World According to John Coltrane DVD.. some jazz CDs you can't find in KL... and still shopping.. LOL!

I just read that Joe Zawinul passed away yesterday!! Man, that's really sad news... he was one of the pioneers of the jazz fusion front, being one of the main members in Miles Davis' band, Cannonball Adderley's band (Joe wrote Mercy, Mercy, Mercy by the way), and of course Weather Report. Even his own band, Zawinul Syndicate, pushed the musical boundaries in the jazz spectrum, incorporating different rhythms from different parts of the world.

This is truly a sad year for music...

Posted by Julian at 1:27 PM No comments:

On behalf of Pro Tem Secretary Junji Delfino (while her internet connection is down), I am pleased to announce that The Jazz Association of Malaysia (JAM) will be organizing its first event and here are the details:

This is basically an open-to-all event, which starts from 3pm, and trails off to the Sunday Jam Session which (usually) starts at 6.30pm until 9pm (or well past if it gets too hot full of musos on stage!).

As this is our first open event, we're starting off with some rather casual activities, including DVD screenings of some live jazz performances and some documentaries, ranging from Keith Jarrett to Buena Vista Social Club. There will probably also be some short performances by established jazz musicians and bands, to make things more interesting (what's a jazz event without a jazz performance, anyway, right?). There will also be some finger food (liver pate and bread, I heard), courtesy of JAM's Pro Tem Secretary, Junji Delfino.

The main objective of this event, is really to just get people who are interested, to come bask in the wonderful spirit of jazz, including musos and non-musos. And this will also be a good opportunity to try to attract new members into the association. Prospective members can sign up and join the association anytime during this meet!! So do inform your friends who are interested to join, and get them to come by this Sunday to sign up.

As the Ramadhan month approaches, please do note that this weekend's event will be the last weekend of live jazz performances at the Top Room for the entire month, as The Top Room jazz programme will be taking a hiatus during this period. Regular programming will resume after the Ramadhan fasting month is over. So, in the spirit of any jazz jam session, let's make this a big, rowdy, one!!


.... must one experience such things?

Frogway the Musical has just finished its last run just a few hours ago at the Actor's Studio Bangsar. It has been quite a crazy few weeks for me, and now it's finally finished. I thoroughly enjoyed working with Michael Veerapen and the Frogway band (Eddie, Fly, Zahid, Charles and Ee Jeng) on this, and the other members of this production - the cast, as well as the crew.

By far, I think the musical was a real success, and there has been some good reviews about it too. But whatever it was, I enjoyed playing every show, and every show had been different in very subtle ways.

Just a side note: By the way, during the final matinee show, we found out that Mel Gibson was sitting among the audience watching the show!! And he came backstage during the intermission, and I flipped out in my head (while trying to remain looking cool). Wow! MEL GIBSON, man!!! Too bad, I didn't manage to get a pic with him.. damn!!

Anyway, it has been a really good (and funny) three weeks, but I'm glad it's over. I'm due for my next break, and since it'll be fasting month this month, I think it'll be a great opportunity for me to take a break from work and regroup myself. Can't wait..

To the cast and crew, the musicians, and the producers, and especially Michael Veerapen (for roping us into doing this show)... THANK YOU for the great three weeks, and it had been a real pleasure and experience working with you guys!

*UPDATE* PS: Thanks for the surprise, btw... I really appreciate it from you guys...!!

To everyone who sent me SMS-es and all, thanks very much for the wishes! You all sure made my day.. I really appreciate it!