I'm back here in the Lion City, for a couple of days. I came here on Monday for a gig with my sifu, Greg Lyons' Omniform Band, and we were playing at Blu Jaz Cafe, right in the heart of the city. It also provided and excellent opportunity to get out of KL town for a couple of days and chill out somewhere else (and play some good music!).

The band itself was a kick-ass band, comprises of keyboards, bass and drums with a large horn section - two trombones, two saxophones, one flute, and a trumpet. It's basically similar to Greg's (KL) Nonet band, but more punch, and that's no surprise - everyone in the group are good players! Because of that, the intensity and energy level of the Singaporean group is much more higher than that of KL. And that was really fun to play.. really challenges me to play! We played some new pieces on top of the older ones, but no less challenging at that. Since everyone in the group are good players, everyone had a chance to improvise at different songs, and it really made the band much more happening! Great night.. intense, and really fun to play. Hope I'll get the chance to play more with this band soon.

On a side note, I also had the opportunity to do a good long run at East Coast Park. A full two hours!! I think I ran for about 15k, plus minus a few hundred metres. Although I haven't wrote about it, but I'm training for the StanChart Singapore Marathon, which will take place next Sunday! So it means I'll be back here again! Woo hoo...

Terry Fox Run and then some..

Been a while again since I updated my blog.. AHaha.. my apologies to my dear faithful readers! I have been so distracted with so many things until blog-negligence is eminent - from work and performances, Facebook (yes, I'm on it.. eck!), downloaded TV shows, sleep, and what's not!

Anyway, there has been some interesting stuff that's been happening lately for me, nothing ground-breaking, but interesting enough for me to note. One of them includes playing for Michael Veerapen in a quartet setting, something he does not do very often (most of the time it's a trio), at Alexis Ampang over two weeks ago.

It was quite a gig... and those who came and say us play will probably agree. Let's just say: for those who know me well, it's been a while since I perspired in a gig like that two nights in a row. Musically it was really challenging, and it's been quite a while I was really pushed like that (hence the heavy sweating!). We played some of Mike's original tunes (Pictures, Consequence), and re-arrangements of some cover tunes (Bop Be, Jauh-Jauh - yes, the Jimmy Boyle one, Bouncing with Bud, and some others). We had Michael on piano, me on saxophones, AJ on electric upright bass, and Charles Wong on drums. Quite a team we made. We only had some rehearsals several days before the gig, but we were taking on some serious material like Phil Markowitz's In The Woods, and Chick Corea's Eternal Child. Despite all the funny mistakes I did (as well as AJ) during the rehearsals, but show itself turned out pretty exciting, and good too (plus minus a few boo-boos.. can't run away from it sometimes!). The band was really open to everybody's playing, and musical interpretation, and this itself lead to many adventurous moments, and very exciting. It was almost.. organic.. like the feeling of the music taking a life of its own! It's something rare to catch something like that in KL. Hope we'll get to do it again soon, too!

Then there's the Terry Fox Run just last Sunday (Nov 4th). It's my second year doing this, and it's something I'm glad to be part of as well. I did it last year with KT, and we didn't exactly do the whole stretch, due to unclear directions. This year was much better, with race (or in this case, run-event) marshalls telling everyone where to go. There was the easy, family route (3.5km) and the advanced route (around 5.5km, although I think it's about almost 6km). This year was particularly interesting for me: I dragged my entire household with me! My parents, my brother and his girlfriend, and along the way met Devin as well! Take it from me.. to be able to get my family members out on something like this is a RARITY!! Like a Mastercard ad:

They managed to finish the family route, and I of course, did the long, advanced route. It was really nice fun, and it's a real good way to have spent time with my family like that.

Here are some pics: 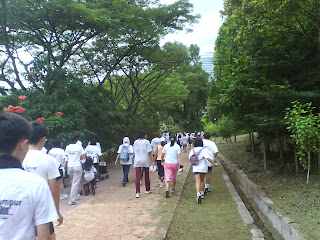 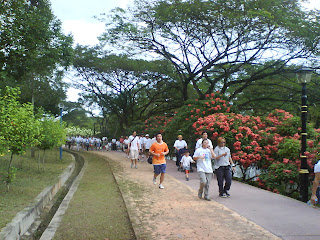 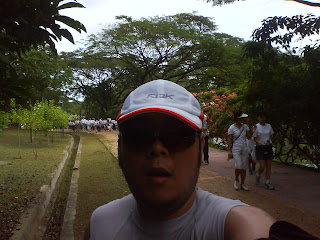 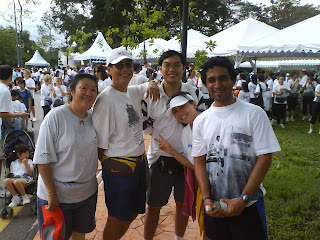 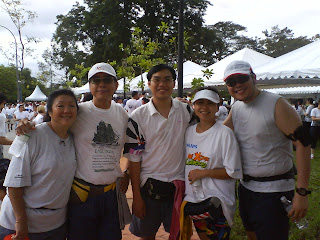 That same evening, I went to the Top Room to do the Jazz Association of Malaysia's (JAM) second event, the JAM Jazz Appreciation Workshop by Michael Veerapen. Michael conducted the workshop, with me on sax, Fly on bass, and Martin on drums, in the band. Quite a few interested people showed up (could've been more), but it went really well. Hopefully there are some that will come out knowing better what happens in a jazz performance and not look like a total blur! Will post pictures if I manage to get some. Then there was the jam session, which was pretty happening as well. Both older and younger generation musos were there to jam (yours truly being in the latter, thank you!).

Got some gigs coming up, as well. Do check the Upcoming Performances for dates and times and all the necessary information.